Writing, music, family and the amazing powers of ADD 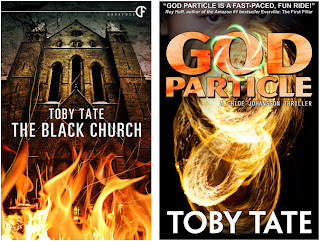 Like most people, I always seem to have a lot going on in my life−more than some, less than others. But what helps is my lifelong Attention Deficit Disorder, or what I like to think of as the ability to be interested in many things at once. Let me give you a run-down.

My fourth book, a young-adult sci-fi thriller called GOD PARTICLE, was released in June, 2013 with Crossroad Press. I just released my fifth book, a horror/thriller novella called THE BLACK CHURCH, in Dec. 2013 with DarkFuse. My sixth book, a supernatural thriller novel called PRIMORDIAL, is on my editor’s desk. I am twenty-five-thousand words into my seventh book, another novel.

I also write for my local newspaper and a local magazine, plus the occasional short story anthology.

Last week, I recorded several tracks with my band, SHANNON SALIGA and the MILLION WATT SUNS. I sing, play guitar, bass, drums, mandolin, keyboards and whatever is needed. I wrote all five songs and I’m also the recording engineer.

I am a stay-at-home dad and spend every day homeschooling our daughter, who is eleven. I usually manage to get some writing in, but most of it happens at night, when everyone else is in bed. There is also the marketing that has to be done for all five of my published books, and believe me, that is a time-consuming process−I am a very “hands-on” author. There is also time spent trying to get reviews, contacting book stores, sending out unpublished manuscripts to editors and/or agents, and on and on.

On weekends, when I’m not writing, I try to spend non-school time with my wife and daughter, fixing up and cleaning the house from the various animals living in it (my daughter is an animal lover), maintaining the cars, and so forth.

I’m an avid reader and fan of classic sci-fi and horror movies (I have nearly 500 DVDs of titles like King Kong, Creature from the Black Lagoon and Forbidden Planet) and I like to travel, though it’s not always affordable.

A few years ago, before I became a stay-at-home dad, I was also a college student and a full-time book store employee with a new baby. On top of that, I was the editor for the school newspaper and for the school’s literary magazine. Somewhere in there, I managed to start writing my first novel and release a CD. Talk about stress. So my life has actually slowed down quite a bit from that particular craziness.

I said all that to say this: I love my life, and wouldn’t change a thing. I’m right where I want to be, doing exactly what I want to be doing, and I’m extremely thankful to be able to say that. I owe it all to God, family, friends, my fellow authors, my publisher, the people who buy my books and music, and a wicked case of ADD!

Check out my writing, music and other insanity at www.tobytatestories.com, and on Facebook, Twitter and MySpace.
Posted by Toby Tate at 8:27 PM No comments: