Creating characters that come alive and jump off the page

Characters don’t even really have to be people. Seriously, they can be machines, aliens, animals, plants, whatever. But if they don’t drive the story, then they aren’t doing their job, and they might as well not even be there.

I’ve read science fiction stories and thrillers where things moved along at a good pace from point A to point B, but because the characters were one-dimensional, the trip was forgettable.

I base almost all my characters on real people, either people that I know or have met somewhere along the way. One of the characters in my supernatural thriller, LILITH, was an aircraft carrier called the USS Gerald R. Ford. That’s right—it was a ship. Hey, they don’t call ships “she” for nothing. Since the Ford was not yet commissioned at the time, I based it on the USS Harry S. Truman, where I had spent several days at sea. Believe me, those ships have personalities all their own, and I tried to bring that across in LILITH by describing things I had experienced while aboard the Truman.

The character of Hunter Singleton, one of the main protagonists of my stories, is based mainly on me, but also on other people I have known. He has a back story, he has a distinct personality, he has interests, dislikes, quirks, certain physical qualities—he even speaks a certain way. You can always tell when Hunter is talking, because he’s a smart ass. Kind of like me. He’s adopted, half Cherokee Indian and half white. He’s a reporter for a national news agency. He knows Kung Fu and doesn’t mind using it when necessary. And he’s usually up to his eyeballs in trouble.

Lisa Singleton, Hunter’s wife, also has certain physical characteristics and personality traits that distinguish her from other female characters. For instance, she’s a park ranger and a black belt in Wing Chun Kung Fu, which she taught to her husband. Her father is Chinese and her mother African American. She’s quite beautiful, like her mother, and small, but also pretty handy with her fists as well as with a gun. If you piss her off, she will take you down.

Lilith, the main antagonist, is more of a conglomeration of different people. I tried to make her evil, but also gave her some faults and frailties, and a back story that will make readers want to sympathize as well as be repulsed. Awesome combination!

There’s a back story with Hunter and Lisa as a couple, and I plan on getting more deeply into their personal stories as they progress through each adventure. The next book to feature them, PRIMORDIAL, is still in the writing stage.

Characters that are integral to the story should have traits that set them apart from other characters—physical traits, quirks, flaws, whatever. They should all speak with a different voice, as well, though that is sometimes hard to do. Characters who I know will only be in one scene I don’t spend as much time on, because they won’t be around long enough for anyone to really care. They’re just there to help move the plot along.

I also like to give flaws to my characters, because real people have flaws. For instance, Hunter has an inordinate fear of flying. As do I. I do not like airplanes, or even tall ladders.

In my latest book, GOD PARTICLE, my protagonist is a 16-year-old girl. Not being a 16-year-old girl myself, I had to draw from people I know, like my own wife and daughter, for instance, who helped me immensely with the character. Chloe is Chinese, adopted as a baby by a loving Swiss/American family. Hence the last name ‘Johansson.’ Not too many Chinese people have the name ‘Johansson.’ 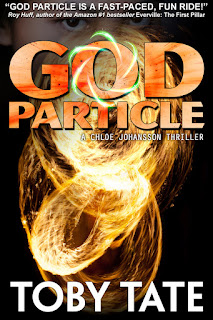 Chloe is also extremely intelligent, already a freshman engineering student at MIT. But she is a little bit spoiled. And selfish. And maybe a little hard headed.

Characters also need some type of friction within the story, something to overcome that will make them grow and reach beyond their own self-imposed boundaries. Just like in real life. Chloe nearly becomes overwhelmed by the events that take place in the GOD PARTICLE, but she has an amazing inner strength that helps get her through. Plus, she prays a lot.

Lively characters are extremely important to my novels. The stories are usually centered on the characters I create, and things move forward because of their actions, or inaction. Without realistic, memorable characters, the literary world can be a bland place, indeed.

For more information on my latest books, find me on the web at www.tobytatestories.com.
Posted by Toby Tate at 12:30 PM No comments:

I found that there were a few rules for writing THE GOD PARTICLE, a young adult sci-fi thriller, that don’t always apply to writing adult thrillers.

For one thing, they say (they being young adult writing experts), that you should establish the age of the protagonist right away so young people will connect quickly. The first paragraph says, “I had the perfect life. I was going to MIT at the age of sixteen…” Check.

Another thing they suggest is writing in first person so readers can feel like they are right there with your character. Most of the book is in first person, except for the parts where I’m following another character, switching back and forth kind of the way James Patterson does. So again, check.

An eye-catching front cover is, of course, paramount to getting good sales. Thanks to Stan Tremblay of Find the Axis.com, I was able to comply. Check again.

I also didn’t want the book to be too wordy. I wanted it to zip along at a good pace, which I did by writing short chapters and keeping the word count at around 40,000. That’s a pretty quick read, even for someone with a short attention span like me. My previous book had short chapters, but was over 70,000 words.

The experts say to never talk down to your audience, because they may be young, but they’re also sophisticated. I wanted something intriguing, a subject that had spent some time in the public eye, and the God particle was the perfect subject.  Most everyone had heard of it, and it was still enough of a mystery that I could put my own twist on it without it seeming too far-fetched. The story involves particle physics, wormholes and multi-dimensional space, but it’s not so complicated that it loses the reader. I speak in a way any layman can understand.

Of course, there was a lot of research and fact-checking involved, but that’s true with all my novels.

Despite the age group of your readership, good characters have to populate the pages of any story to keep it interesting. Shallow, one-dimensional characters will pull your story down and your sales along with it. And you can forget any sequels. All my characters in all my books are well fleshed-out (so to speak), according to their importance in the storyline. There is a lot of dark drama involved as well, where our characters fight seemingly impossible odds. Suspense can make a good story great.

I usually make it a point to get at least one endorsement for my books. For GOD PARTICLE I managed to get Roy Huff, the #1 Amazon bestselling author of EVERVILLE: The First Pillar, who called it “…a fast-paced, fun read!” Thanks Roy!

I had a lot of fun writing GOD PARTICLE, and I think you will have a great time reading it. Pick up a copy now for only $2.99 at Amazon, B&N.com, Smashwords or Crossroad Press.

Check me out on the web when you get a chance at www.tobytatestories.com.