I am a traditionally published author taking my first dive into Amazon's Kindle Scout pond, and even though the water was cold at first, I'm slowly acclimating.

For those of you not familiar with Kindle Scout, here's a little blurb about the program from Amazon.com: "Kindle Scout is reader-powered publishing for new, never-before-published books. It’s a place where readers help decide if a book gets published. Selected books will be published by Kindle Press and receive 5-year renewable terms, a $1,500 advance, 50% eBook royalty rate, easy rights reversions and featured Amazon marketing."

Just for added incentive, anyone who votes for a book that is selected gets a free copy upon publication. Pretty sweet!

So it's pretty cut and dried. The contract is simple enough that even a non-business-minded lunkhead like me can understand it. It was suggested to me by an author friend of mine who also took the plunge, and it paid off for him in a big way. I'm hoping some of that success is still floating around in the water like an amoeba  waiting to attach itself to my brain stem.

The authors that I have met on Kindle Boards who are treading water with me have been pretty amazing in supporting me and each other so we all don't drown like a bunch of...uh...drowning people. From what I can gather, the majority are previously self-published. I tried that once, with bad results. I felt like a fish flopping around on a hot sidewalk. I decided not to do that again. So every book I have in my back-catalogue is traditionally published by small to medium-sized presses. I'm not a best-seller by any stretch, but I could definitely be considered a mid-lister.

So, with my latest book, RED RABBIT, I changed direction slightly. Most of my books are sci-fi/horror/military thrillers usually with some type of supernatural overtones. Think James Rollins meets Dean Koontz. RED RABBIT has been labeled an occult detective thriller, more along the lines of James Patterson meets Dean Koontz. So see, Koontz is still there, but Rollins has been replaced by Patterson. Get it? It's still thrilling and it still has horror, but the sci-fi aspect is pretty much non-existent. 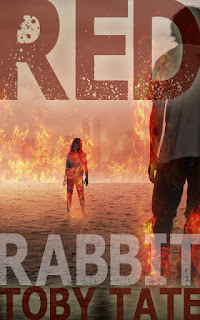 So that led to a lot of head-scratching on the part of publishers. "Um, yeah, the writing is great and everything but...well...huh?"

So here I was with no agent, no publisher, and a brand new book with no home. So my friend says, "Hey, Toby, why not submit to Kindle Scout and become fabulously wealthy and famous like me?" So I said, "I never heard of Kindle Scout."

I looked it up and liked what I saw. It seemed like a boon for unknown authors and people like me who are traditionally published but who have a book that hasn't found a home.

Of course, there are ground rules for submitting which, if you don't follow, pretty much dooms your chances from the beginning.  You have to provide your own cover, which should be professional-grade. Nobody is going to pick up a book with a crappy cover. They ask that it be professionally edited, which means I was already ahead of the game since I went through extensive edits with my first agent. Once all that is done, you submit your book and wait for approval, which in my case took only a few hours.

Once your book and the related info is posted on their site, the waiting begins. The campaign lasts for 30 days, during which it's up to the author to get as much traffic to the site as possible and rack up nominations. If you're lucky enough to hit the "Hot and Trending" list, which I did the first two days, then you will hopefully get noticed by the people at Kindle Press.

My friend suggested making a few posts on Facebook and leaving it at that. Well, I believe in the old saying, "Anything worth doing is worth overdoing," so I bought a Facebook ad and ran a HeadTalker campaign. The page is getting pretty steady views and my other books have even started selling again. I'm getting a ton of hits on Facebook, too, so it's all working for the best. Even if I don't get picked for publication, I'll have all those new fans from the campaign. It's a win-win in my view.

So, if the book doesn't get picked, I may either shelve it or let my agency try to sell it again. I'm already working on the sequel, plus another book in another series, so I've got some things lined up. I will keep you posted on how it all turns out.

The campaign runs until May 21, so if you feel so inclined, you can vote here: https://kindlescout.amazon.com/p/9Z4U8ZESJ4LH.

If you want to be part of my Headtalker campaign, just sign up here: https://headtalker.com/campaigns/red-rabbit/

Remember, if you vote and my book gets chosen for publication, you get a free copy! What could better than that? Okay, free money might be better. But then you would just use it to buy my book, right? Right!
Posted by Toby Tate at 2:16 PM